Precious few countries can boast of a Christmas repertoire as ample and colourful as that possessed by the Czech Republic. The Baroque era imbued the texts of songs with enchanting, tender poetics – with awestruck yet perplexed shepherds enthusing about the beautiful infant Jesus. Later on, a growing number of formally more complex pieces (pastorales) were written, most of them taking the form of arias or duets with instrumental accompaniment.

A notable composer in this respect was Josef Antonín Sehling. Although still anchored in the Baroque world, he paved the way for the accession of a new musical style. He studied in Vienna and subsequently worked in Prague as a member of Count Václav Morzin’s renowned orchestra and as second violin at Saint Vitus Cathedral, although standing in as Kapellmeister over the long term (an interesting parallel can be drawn with Zelenka, the “counter-bassist” at the court orchestra in Dresden).

Sehling was Kapellmeister of several Prague churches, including the Church of Our Lady under the Chain, where the present world premiere recording was made. The album features pieces intended for the period from Advent to Epiphany. Sehling’s music contains the magic of Michna’s songs yet concurrently opens upon a world familiar from Ryba’s Christmas Mass.

Sehling’s orchestral command is excellent – as one expects from an orchestral player – and this CD has musical interest outside of the season for which the pieces were originally composed. The performances, particularly from alto Markéta Cukrová and tenor Václav Čížek (a beautiful voice, most intelligently applied in a fine duet Vis ingens est favori with Hana Blažíková) and the Collegium Marianum Prague under Jana Semerádová, are little short of revelatory throughout. 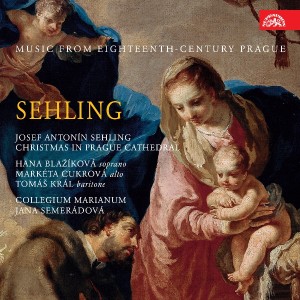